The MONIAC (Monetary National Income Analogue Computer) was developed in 1949 by William Phillips, an economist from New Zealand. It was built in order to provide more insight into the macro-economic processes of the United Kingdom for the students of the London School of Economics. Its mode of operation was based entirely on analogue principles, and it used water to simulate money flows between different financial instances.

Only 14 replicas of this computer were ever built. One of these replicas was put on display in the Science Museum in London. In 1953, this MONIAC computer was given to the city of Rotterdam as a gift on the 40th anniversary of the Erasmus University Rotterdam. This heritage can still be admired today in the THEIL Building.

Static information is not nearly as interesting and appealing to visitors compared to dynamic information. Erasmus University Rotterdam was looking for some sort of a solution that would ‘communicate’ with the visitors, mostly consisting of younger people, and to make them more enthusiastic about this small, but defining piece of history. Since the MONIAC is no longer in use, and the device no longer functions, the challenge for us was to explain its mode of operation using a creative design. We started the search for a modern solution in cooperation with the Erasmus University.

We follow our Custom Application Development Process for all of our projects. This specifically means that we start with an inventory, where we examine and map the problem, the goal, the users and their expectations. During this phase, it became clear that our target audience would mostly consist of younger people. Bearing all this in mind, we produced a number of sketches, and presented three different design styles via a mood board in order to make sure that we get the appearance right. The three design styles we chose were: the da-Vinci-technical-drawing style, the cartoon style and the 1940’s-advertising style. In the end, we decided to settle on the cartoon style for our project, as we found it the most appealing. This design allowed us to present the economic processes and money flows transparently in a playful fashion.

After the design we chose was approved, we started with the development process by adding responsiveness to the images. These designs needed to be implemented in such a way so as to ensure that they are compatible with the touch screen as well as the hardware on which they run. This responsiveness allows visitors to interact with the screen and to request further information about the MONIAC computer on their own. 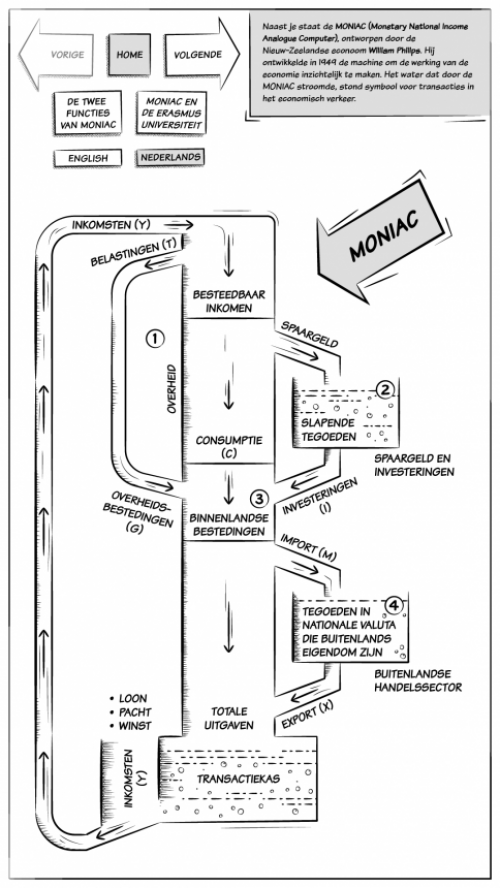 Today’s generations are stimulated by dynamic information, as evidenced by the fact that digital screens attract more attention than static text and images. Our touch screen kiosk gives you the ability to interactively go through the information. The interactive display that we have created for the Erasmus University Rotterdam creates an experience for the audience, where they are able to request and receive information about the MONIAC computer at a glance. In addition, the playful design that we chose for our client tells the story in an interesting and creative way. Another huge advantage of switching to a digital solution that should not be overlooked is that it offers the possibility for future updates, such as expanding existing and adding new information as well as integrating various multimedia sources and/or social media feeds.

Do you need an information kiosk or a touchscreen solution for your visitors?

At Future Forward you came to the right address! With over 20 years of experience, we are an extensive resource for digital signage solutions, ranging from hardware to software development. We deliver everything in one complete solution, which is tailored to closely match the needs of your business. Our services include, digital signage, concept and branding strategies, deployment and installation, monitoring and support. We bring together design, strategy and technology when it comes to digital signage.

We use cookies to enhance your experience. By continuing to visit this site you agree to our use of cookies.